“WOW!!! Great work, Paula! Roland Emmerich, the Director of the Movie ‘Anonymous’, loved the portrait bust of Edward de Vere presented to him.

"I am thrilled by the beautiful and striking bust of Edward de Vere that you sculpted for Ben August! At the Shakespeare Oxford Fellowship (SOF), we are honored to use images of this bust on our website and brochures. You have truly captured the essence of this great writer."

The Edward de Vere Bronze Bust is a highly detailed portrait of the 17th Earl of Oxford. The exquisite detail of the unique clothing of the Elizabethan time period was meticulously captured by Slater’s amazing talent for sculpting ornate works of art. This stunning three-dimensional bronze bust brings the two-dimensional Welbeck painting to life.

De Vere is considered by many to be the person who actually wrote all the plays and sonnets attributed to Shakespeare, but did so through another person–a commoner by the name of William Shakespeare who could not even write his own name. This secrecy by de Vere was done so, because in that time period (1550 to 1604) in England, it was not acceptable for an Earl to write plays, especially ones critical of the Royal Court. The movie, ‘Anonymous’ (2011) captures this story and depicts the relationship between these two men.

A photograph of the de Vere Bronze Bust was printed on the cover of a book about de Vere, and photographs of the bust were used on three private ‘Earl 17’ wine labels (2011, 2012, and 2014 Cabernet Sauvignons by Mount Veeder Winery).

For more information about Edward de Vere and the Shakespeare authorship, please visit the Shakespeare Oxford Fellowship website at https://shakespeareoxfordfellowship.org/trustees/

The following is a wonderful interview of Slater about her creation of the Edward de Vere bronze portrait bust:

Last week, the “Shakespeare” By Another Name Blog featured an interview with Ben August, the Houston entrepreneur who a week ago unveiled one of the most ambitious art projects in the history of the Shakespeare authorship controversy — a life-sized bronze bust of Edward de Vere, Earl of Oxford.

Below we’ll be featuring an extended interview with the bust’s sculptor, Paula Slater.
The de Vere bronze August says, will soon be for sale in a limited edition casting as well as in marble resin and Hydro-Stone. More information on this, as well as August’s painted duplicates of the “Wellbeck portrait” of Edward de Vere (on which the bust is based) can be found on his website: VerilyShakespeare.com.
August said in his interview that once he had the idea in 2008 of replacing his old Shakespeare bust with that of the true Bard, he began looking online and at art exhibitions for the right sculptor to take the project on. Last year, after interviewing and rejecting several other artists, August said he’d finally found his ideal. He commissioned Hidden Valley Lake, Calif.-based artist Paula Slater. 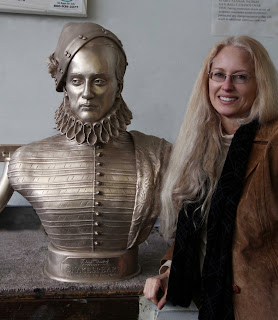 Slater, pictured here with a rough of the de Vere bust before its layers of patinas had been applied, had sculpted many monuments but in 2009 earned international acclaim as the sculptor of a memorial bust of Iranian revolutionary martyr Neda Agha-Soltan, a 26-year-old protestor whose shooting death by Iranian government forces was captured on a widely distributed video on the Internet. Within days she’d  become memorialized around the world as the “Angel of Iran.”
I spoke with Slater by phone in early March, as she was putting the finishing touches on her de Vere bust.

SBAN BLOG: When did Ben August first approach you with his possible commission for the Edward de Vere bust, and what was your first response?

PAULA SLATER: Ben came to me in July [2010]. He sent me an email saying he was interested in commissioning a portrait. We talked about how I do portrait bronzes. Then he emailed that picture [i.e. the Wellbeck portrait of de Vere], and I about flipped over the moon!

SLATER: I sculpt congressmen and senators and leaders of industry. And this was so different. I love doing anything that has period clothing. Anytime there’s period clothing, it’s a challenge and a stretch.

Then when he emailed me more about the Oxfordian theory and who this actually was, I was totally captivated. I started reading more.

SBAN: How would you describe your own style — and how would you be applying that for this commission?

SLATER: I like to sculpt in high detail and with museum-quality finishing — in the style of [Gian Lorenzo] Bernini and Jean-Antoine Houdon.

The Wellbeck is a very flat painting. I really felt that I was going to need to bring it to life. I wanted that knowing look — yet also knowing there’s something hidden behind those eyes. That’s what I wanted to capture. 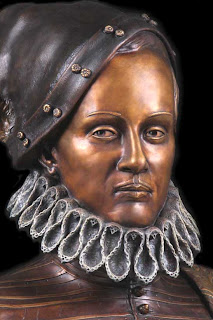 I think in hearing about Edward de Vere, I felt there was an intensity and a lust for knowledge, certainly. And a bravado. At that age too, there is an invincibility. I think he displayed all of that. Some of that came across in the Wellbeck, and some of that was my feeling.

He was an aristocrat, and he had that flair with the clothing. He was an extravagant personality. But there’s this mystery. He was really a deep thinker. I felt I needed to have this mystery behind the eyes and have this depth of thought.

SBAN: Could you describe the process of making the de Vere bust? SLATER:  To make a bronze bust, you start with a clay original. It’s life-sized. 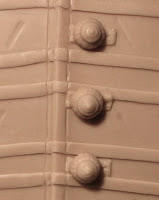 Because there was so much detail, this was a lot to sculpt. There was the frilly lace collar and the buttons. And once Ben and I were both happy with that, a mold was made.

I took it to a mold-maker, who coats [the clay bust] with many layers of polyurethane. And a plaster mold is put on top of that. That’s called the “mother mold.” So you’ve got a nice hard mold. Then wax is poured inside the mold. And the mold is rotated around so the wax goes around to the inside of the mold. [The wax] is about 1/4 of an inch thick. hen you take off the mother mold, the hard plaster. And you peel off the urethane. So now you’ve got a wax that looks like the bust. And it’s hollow.

I then work my own waxes in case any details have been lost or air bubbles have come in. Usually everything is there. But maybe it requires a little refinement.

Then “sprues” are added. That’s a long square piece of wax that’s attached. Then it gets dipped into a “slurry” — coating with this sandy liquid batter. That’s allowed to dry. And then it gets coated again. They do this 10 or so different times. What you’re left with is a hard shell. This becomes the new mold.

So you melt the wax out of this hard shell. And where you put the sprues are the pour holes. The hot bronze coats all the insides of the hard shell. This is called a “lost-wax bronze.” It’s a 4000-year-old system.

SBAN: How many drafts of the clay original did you go through?

SLATER: I showed Ben maybe four or five drafts. I’m really tenacious about my sculpting. Even when people say that it looks fine now, I know it needs something more. I need to keep going until I say, ‘Ahh. That’s it!’

With the de Vere bust, the question was how do I think he might want to be remembered? The answer comes through my hands kinesthetically when I’m sculpting. It’s beyond words.

SBAN: The bronze bust has an extra layer of patinas, right?

SLATER: They polish it to being like a bright brass. I work with a patina artist who heats the metal with a propane blow torch and applies different chemicals to get different colors.

SBAN: What about the marble resin and Hydro-Stone versions?

SLATER: That’s a different kind of mold. I worked on a wax that I made sure was beautifully finished. It was poured extra thick too. I took it to a resin and marble casting company, and they made their own mold of it. They cast it.

SBAN: But for you, bronze is the ultimate medium, right?

SLATER: There’s something very substantial about bronze. It lasts for centuries. To me, it really cements his name with Shakespeare. 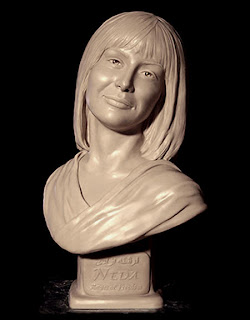 It’s similar in that same way to when Neda was shot in the heart in Iran. I just felt so compelled to sculpt her. I sculpted a portrait bust of her — she was wearing the hijab, the veil. And then I sculpted a second portrait of her.

For the Iranian people it was not only that someone in the U.S. cared, it also helped to cement her life and her [importance]. It became historic. Evidently 50 million people in Iran know this bust!

I thought I was going to sculpt her and donate the bust to an Iranian-American organization. But one organization leader told me to hold on to it until Iran is free because this bust should go in the art museum in Tehran.

The Neda sculpture just became so much bigger than I ever anticipated. It meant so much to have this image of her in 3 dimensions that the Iranian government couldn’t destory. It helped keep her alive.

SBAN: The author of The Sonnets of course says that even bronze doesn’t last forever. But there is still something a little more permanent about the recognition that this bust conveys.

SLATER: Because bronze lasts for centuries, it becomes part of the fabric of humanity. When we do that with an iconic image, it becomes historic.

I feel very blessed to do what I love for a living. This will, in the end, outlive us all.