Paula, We continue to get fantastic comments about the statue of Ulysses S. Grant you created for West Point. It is in one of the most prominent locations on "The Plain". We have many visitors and tours and people always stop to spend time at the Grant Monument. We continue to be grateful for the wonderful job you did sculpting it. It will continue to inspire the cadets and all who see it here at West Point long after we have passed on.

The Bronze Portrait of General Grant you sculpted is magnificent!
It is the best money I've ever spent!!

Paula, Thank you for sending the images of the patination of the Grant statue. The color of the patina looks fantastic and will fit nicely with the monumental artworks on the level of the Plain at West Point.

Good Morning Paula, Wow! This is a magnificent portrayal of Grant and like your other sculptures, you have the creativity and skill to make the person live while reflecting their persona. Congratulations on this wonderful creation!

"Paula, Please go ahead and finalize the design and ship the model. It looks wonderful!

Thank you and kind regards," 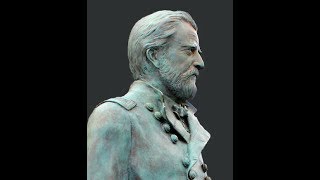 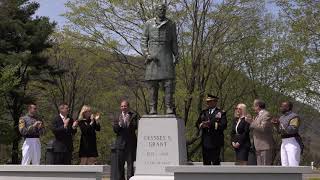 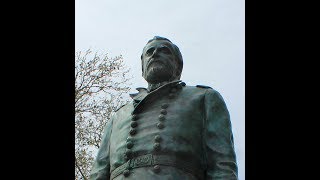 Paula Slater was awarded a commission to sculpt the General Ulysses S. Grant Monument for the United States Academy at West Point. The finely detailed full-figure bronze portrait of General Grant is 7-1/2ft high and is installed upon an elegant 4-1/2ft high solid granite base. Slater worked closely with the West Point Museum Curators to assure historical accuracy of the portrait and all uniform accoutrements.

The General Grant portrait is portrayed in a four star General uniform of the Union Army during the Civil War. Grant worked under President Lincoln to put an end to slavery in America. Grant was later elected the 18th President of the United States.

A 16 inch high small clay model was first sculpted by Slater for approval by West Point before sculpting the full size portrait. The small model has been molded and cast in a bronze limited edition.

A wonderful Cover Story article was published in ‘The American Scholar’, a prestigious magazine first published in 1932. Slater’s photograph of her General Grant Portrait Statue is on the cover of the September 1st, Autumn 2019 edition. This is the link https://theamericanscholar.org/moral-courage-and-the-civil-war/#.XW-MptHsaUk

Also, there is a wonderful article about General Grant and the West Point Grant Monument at the following link, http://grantstomb.org/wp-content/uploads/2019/10/Grant-issue-29-Fall-Winter-2019-FINAL.pdf