The bust looks absolutely beautiful! It's incredible!, it's astounding. My husband was also blown away when he saw it.

Wow this is just amazing. The portrait is incredible. I left you a message on your cell phone too that going forward with the bronze process is really exciting. Your work is exceptional. Thank you for your great talent and dedication.

I am so thrilled to see Stanley Cmich come back to life in your beautiful work. He looks just like I remember him. I have no doubt you will receive positive feedback from Dianne. 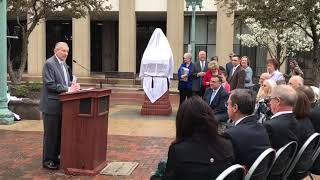 Past Mayor Stanley Cmich was the longest serving Mayor in Canton, Ohio history (from 1964 to 1983). He was known as the ‘Main Street Mayor’ and as a tremendously honest man. Cmich lead a courageous crusade along with Judge Leroy Contie to clean up the city of vice and corruption. They succeeded and before Cmich left office, Canton won the All-American City Award.

Cmich was one of eleven children born to a Polish-immigrant– “he never got rich off of being mayor and he never forgot where he came from.” He was light years ahead of his time when it came to race relations and brought African Americans into his administration and promoted them.

Cmich served bravely as a World War II veteran who was twice wounded in combat, earning him two Purple Hearts. Slater finds it especially inspiring to sculpt honest people of high moral integrity. Once this bust is cast in bronze, along with Judge Leroy Contie’s bust, they will be installed in a lovely downtown mall being built in their honor