“Paula, Thank you for all your hard work… I was thinking the other day: if Neda is the Angel of Freedom, you my dear, are the Angel of Solidarity!

Slater received hundreds of emails in response to the Neda Portrait sculptures, the following are just a few:

"You have sculpted a proud Persian Lioness whose spirit could not be broken," as one Iranian gentleman wrote after seeing the bronze bust. Another wrote, "Incredible Paula! There is so much life, even in the photos, that I believe she could speak." And another response, "It is so beautiful it is breathtaking, what a treasure for the Iranian people."

"I would like to thank you in the name of all freedom seeking Iranians for your wonderful work of art. Both portraits of Neda are beautiful, but the second one frees her from the head cover, which removing it is one of the biggest wishes of the women in Iran. Thank you again and you have a special place in our hearts."

"This is magnificent. I am really amazed with your magical art. I am not really sure where would be the best place to keep this fabulous art piece, but I think this must eventually go to the National Museum of a free Iran in the future." 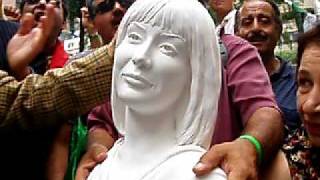 The second portrait bust of Neda with her hair uncovered, is the face on the other side of the coin. The first sculpture was a historical portrait of Neda ‘Angel of Iran’.  It showed a strong and proud Neda whose spirit could not be broken by an oppressive dictatorship under which she lived and died. However, Slater’s second portrait sculpture without the hijab (scarf) is of Neda ‘the Angel of Freedom’ and she is radiating the hope of her people for a free Iran. It is a more intimate portrait in which she was free to show her vulnerability and innocence.

Slater started sculpting the first portrait of Neda when the only picture of Neda that was absolutely verified to be a photograph of her was the one where she is wearing the scarf. Due to the many requests Slater received asking that she sculpt a portrait of Neda in which she isn’t wearing the hejab (that women in Iran are forced to wear by the Islamic Regime) Slater then  sculpted a second portrait bust based on a lovely new photograph taken by Neda’s fiancée which had become available.

Neda Agha-Soltan was a young Iranian woman who was shot in the heart by a government sniper while on her way to an Iranian election protest.  Neda was a philosophy student, an accomplished singer and was passionate about music and travel.  She was also studying to be a tour guide and had traveled to Dubai, Turkey and Neda was engaged to be married.

“She was a person full of joy,” said her music teacher Hamid Panahi. “She was a beam of light.”

Nedā is the Persian word for “voice”, “calling” or “divine message”.

Neda become known as The Angel of Iran, The Angel of Freedom. Slater was so saddened by the senseless murder of this lovely young woman that she wanted to turn the pain she felt into art.  So she sculpted the life size bust of Neda and had it cast in bronze with the plan to donate it and the hope that it would help to memorialize this Angel of Iran. The Iranian government banned Neda’s family from even having a memorial for her. The following two press releases tell  more of this story.

Slater received a lovely gift from famed Iranian horticulturalist Mr. Khodadad as a thank you from the Iranian community for her portrait sculptures of Neda. He is known for his internationally registered exotic rose varieties and the “Paula Rose” is a unique rose strain bred by Mr. Khodadad.  Mr. Khodadad sent Slater several of the Paula Rose bushes which she planted on the pathway to her Sculpture Studio. “I am so honored that Mr. Khodadad created this beautiful new rose and named it ‘Paula’!” exclaimed Slater.

Click on the link below for a youtube video of Caspian Makan receiving the faux marble sculpture of his beloved Neda at an event in Toronto, Canada.  He emailed Slater with a lovely thank you note for this gift. watch-v=TM8biawRmTI