The unveiling at Nationals yesterday went really well. We had a good number of press/media folks, and the owner of the Nationals, Mark Learner attended. Everyone was blown away by how amazing the statue looked! Also fans walking by immediately started taking photos with it! Thank you for your continued hard work on this project, the statues look incredible!

Paula, Thank you so much for the update and all your hard work on the statues! Can't wait to see the next batch up and installed at the parks!

Looking forward to seeing your beautiful work in person next week! 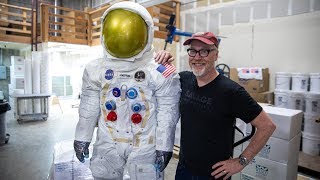 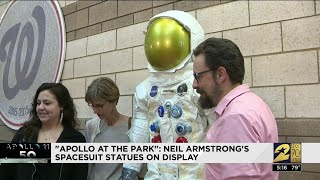 Neil Armstrong Apollo 11 Spacesuit Replicas (15 Life Size Statues) were created by scan data supplied by the Smithsonian National Air and Space Museum of Neil Armstrong’s Apollo 11 actual spacesuit.  Scansite 3D manipulated and digitized the data so that it could be used to create a life size 3D Form print sculpture. The 3D print was an accurate replica but needed much sculpting and refining work before a mold could be made for roto-resin casting. Paula Slater spent many hours sculpting, repairing, filling in undercuts, sanding, cementing missing parts, etc.. After the mold was made and the first of 15 resin castings was produced, it was Slater’s responsibility to color match the paints to be used for the spacesuit statues. Paula chose a mix of metallic enamel and acrylic paints and experimented with airbrushing and hand painting the many coats needed for each element of the spacesuit. Then set up the written and illustrated proto-call for how all 15 spacesuits were to be painted. Slater also needed to photo shop the NASA patches, the ‘cheat sheet’ on his left wrist, the flag and make a template for the zigzag stitching on his knees. All aspects of replicating Armstrong’s spacesuit as closely as possible were then approved by the Smithsonian National Air and Space Museum.

If you notice there is “moon dust” on the feet and the lower legs of the spacesuit with less higher up. When the Smithsonian representative flew out to approve the first spacesuit Slater painted, their only requested change was that they be dirtied up a bit with the look of moon dust, like Armstrong’s actual spacesuit.

NBC 6:00 Bay Area News on August 29, 2019 broadcast a feature about the creation of the 15 Armstrong Spacesuit Replica Statues. After the television broadcast it was also playing on the NBC Bay Area News website with a more lengthy print article below the video. This is the link: https://www.nbcbayarea.com/news/local/Bay-Area-Company-Creates-Out-of-This-World-Replica-of-Neil-Armstrongs-Space-Suit-558610431.html

The Smithsonian’s National Air and Space Museum commissioned San Rafael’s Scansite to create fifteen replicas of Armstrong’s suit and placed them in ballparks around the country — using technology probably even more advanced than the actual systems that sent men to the moon.

“We really want to bring the magic back for people that were not born yet, or were too young to appreciate what happened,” said Lisa Federici, CEO of Scansite which scanned and replicated the suits using 3D printing.

The project began with Armstrong’s original space suit which the Smithsonian dug out of storage and scanned using high resolution 3D technology. The San Rafael company used the scans to create a life-size 3D print of the suit. The print was then in-turn used to create a mold which the suits were created from, using a process known as Rotocasting.

The high resolution scans and printing faithfully reproduced every patch on the suit, the fine stitching on the legs and even a detailed list of chores and reminders printed on Armstrong’s left sleeve.

“We’re calling it a cheat sheet,” said Paula Slater, a sculptor who oversaw the painting of the suits. “I’m not really sure what it is, but it has a lot of information for Neil Armstrong.”

The suit, standing over six feet tall with a gold face mask is an imposing presence, looking as if Armstrong himself was standing in the business waiting his next command. The suits were installed at the ballparks in mid-July to commemorate the 50th anniversary of the lunar landing and famous space stroll. Federici was a child when the event took place but recalled the reaction back on Earth.

“It’s probably the only time in my lifetime,” Federici said, “where life as you knew it around the planet absolutely stopped and took notice.”

Many of Scansite’s employees who worked on the project weren’t alive yet when the Apollo 11 lunar module carrying Armstrong and pilot Buzz Aldrin touched down on the moon July 20th, 1969. Yet the significance of that event has carried through the decades and is channeled into the realistic-looking suits.

“It takes something that really looks like fantasy and brings it, actualizes it, into the real world,” said Olivia Coelho, an artist who worked on some of the painting detail. “I mean this person, this human being in this space suit actually left Earth and landed on the moon and walked on it — and you can just feel the reality of it.”

Slater said fans turning out for the suit unveiling during a Giant’s game at Oracle Park were excitedly taken with the suit in all its interplanetary glory. Slater took dozens of photos of people posing with it.

“Everybody wanted to be next to it,” Slater said, “touch it, pose with it.”

The suits are scheduled to remain up at the ballparks through the Fall, giving fans of baseball ample time to become fans of space travel.

An early model of one of the suits sat in Sitescan’s cavernous work space, its NASA and American flag patches looking as if they’d been painstakingly sewed on — even though the suit was crafted from resin. The building was filled with other chillingly accurate examples of priceless artworks the company had been commissioned to scan and copy over the years including the face of Yoda. His fellow star tripper in the form of a space suit sat nearby, as if Armstrong’s small step for man had landed him here in the storage room.

“These are absolutely identical,” Federici said admiring the outfit. They are mind-blowingly realistic.”

https://vienna.usmission.gov/unvies-neil-armstrong-spacesuit-replica-statue-is-on-tour/#:~:text=The%20statue%20%E2%80%93%20an%20exact%20replica,engage%20with%20its%20interactive%20features. One of the 15 Neil Armstrong Apollo Spacesuit statues, we helped to create, was sent to a Museum in Vienna, Austria and is now going on tour to Museums in Germany, Slovenia, Hungary, Bulgaria and the Czech Republic and then back to Vienna. The other 14 statues are displayed in Museums in the U.S. including the Nasa Space Center. It was a very involved and time intensive project, but it was also very rewarding and inspiring