“Paula, thank you for sharing your amazing talent and for the awesome artistic creation of this bronze Memorial. Your wonderful creative gift masterfully captures in sculpture, the sentiment of many. With deepest gratitude, 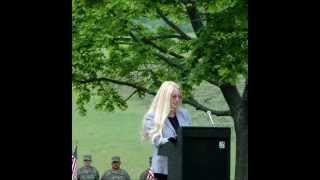 THE ASCENT OF HEROISMA swirl of wings and feathers gently guides our fallen heroes home.

As they are greeted with Love upon their ascent,

may their sacrifice never be forgotten.

This elegant and complex custom military bronze monument stands 11-1/2’ high on its granite base under the outdoor sun surrounded by trees and a gorgeous 360 degree hilltop view. ‘The Ascent of Heroism’ includes seven high and low relief figures swept up in a swirl of wings and feathers. It was installed upon a 5’ high solid granite base in the center of a Veterans Circle at Grandview Cemetery in Altoona, Pennsylvania.

Mike Hurm wanted to commission Slater to sculpt a custom veterans memorial bronze sculpture but did not know exactly how it should look. Slater asked him what war the sculpture should represent. Then he explained that the location for the sculpture was a veterans’ circle where American soldiers from the Revolutionary War through to the Iraq War were laid to rest. Rather than sculpt a soldier or two, Slater asked her client if he was open to something more creative and she would get back to him with a design sketch. He very much wanted to see what she had in mind and to let her imagination fly. Slater did just that, as she designed a monument of seven figures from seven American fought wars swept up in a swirl of wings and feathers.  The sculpture includes soldiers from The Revolutionary War, the Civil War, World War I, World War II, the Korean War, the Vietnam War and the Iraq War.

Hurm loved the concept and the sketch.  He consulted with the owners of the Grandview Veterans’ Circle and they loved it too. However, they asked if it was possible for the Sculptor to make a few of the figures portraits of individuals actually interred at Grandview. Slater agreed and was supplied with photographs of five veterans from five of the wars: The Revolutionary War soldier, The WWI Red Cross Nurse, the WWII Pilot, the Vietnam War Sailor and the Iraq War Soldier. The descendants of these veterans were all brought to tears at the dedication when the sculpture was unveiled and they saw their loved ones’ portraits honored in glowing bronze.

This stunning sculpture was dedicated on Memorial Day, May 28th 2009. Slater was a keynote speaker at the unveiling and dedication event, along with Vice Admiral Michael Bucchi, Senator John Eichellberger, President of the Navy League Dr. Peter Starr and others. It was an amazing ceremony with open hearts and beautiful blue skies. The inspiring event included the Honor Guard placing a wreath by the monument, the passing of a rider-less horse, a 21 Gun Salute and Memorial Taps were played.