“Paula, Thank you for meticulously sculpting all five of the huge National Monument bronze sculptures and as the final component to the design, thank you for sculpting the Not Forgotten Fountain in masterful detail. Paula you have been a huge blessing to this project. I am grateful for all that you did to help create this national treasure into reality. I really enjoyed working with you, but more so, developing a great friendship.”

“It is my pleasure to recommend Paula. I can assure you, her professionalism and attention to detail is second to none. She is an amazing lady and world class sculptor.”

~ Larry Chilcoat – JBMF Board of Directors

“As an animal artist myself, viewing the majestic bronzes of these breeds made it clear Slater had accomplished her goal. It is a testament to her work that I was drawn to touch, feel, and pet the bronze lifelike dogs as if they were real.” 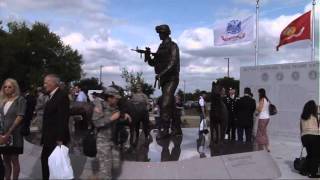 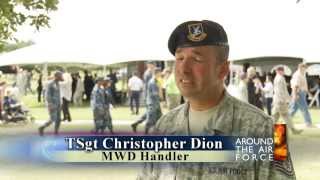 Although other war dog memorials have been created, none have the distinction of being elevated to the status of a National Monument. The process for this National designation took many years. The U.S. Military Working Dog Teams National Monument needed to be approved by the U.S. House of Representatives and the U.S. Senate and was then signed into law by President George W. Bush in 2008. The law was then amended by President Barack Obama in 2009, authorizing the John Burnam Monument Foundation to design, build and maintain the National Monument. Slater was selected to sculpt all seven of the complex monumental sculptures for the Monument because of her professionalism, her impressive body of sculptural work and her attention to detail.

When Slater was questioned as to whether she felt the pressure of sculpting this huge commission? She responded, “I do feel the weight of these kinds of large historic projects, literally there are thousands of pounds of bronze sitting out there, but figuratively, all of us who were involved with this National Monument have felt the weight of it. We wanted to get it right, to bring our greatest talents to bear.  We all knew what it meant, what it stood for–this is a National Monument, it is for everyone in this nation, it is for the public, and the world. However, if I have done my job well, these bronze sculptures will be a timeless reminder that evokes the same silent and innate human understanding a hundred years from now as they do today–the understanding of the immensely important role, the dog handler and his working dog partner have played in peace-time-rescues and war time heroism.”

This commission required Slater to create the immense work depicting a military handler, a Doberman Pinscher, Labrador Retriever, German Shepherd, and Belgian Malinois. Slater said she reviewed pictures of the breeds, met with breeders, and examined dogs so she could understand the nuances of each dog.

The first dog was the Doberman, she said, and it was the most difficult. Next was the German Shepherd, which was also a challenge because she was asked to represent this dog breed from the Vietnam era–the American German Shepherd today is quite different from the dogs used by the military in Vietnam. Having owned a Labrador made that sculpture easiest for Slater.

First, Slater sculpted an 18” high clay model. She, Burnam and the Board of Directors met with the Pentagon for approval of the small model before Slater began sculpting the huge full size figures. Once each figure was completed and approved in clay, molds were made and delivered to the Artworks Foundry in Berkeley, Califonia. Slater has always worked her own waxes and is involved in all aspect of the bronze casting process.

The U.S. Military Working Dog Teams National Monument pays tribute to the Dog Handlers and their military dog partners since WWII. The highly detailed bronze Dog Handler in full combat gear, including side arm and rifle, is 9-1/2 foot high and the four military dog breeds (German Shepherd, Labrador Retriever, Doberman Pinscher and Belgian Malinois) are over 5’ in height.

The location of Lackland Air Force Base was chosen because this is where the majority of military dogs and their handlers are trained. Off to the side of the main Monument in its own contemplative courtyard is the bronze ‘Not Forgotten Fountain”. The space allocated for the Monument required extensive granite, landscaping, night lighting, water feature/fountain and flag poles as well as the seven huge bronze sculptures.

The corporate sponsors, Petco and Natural Balance, had a monumental replica reproduced of the monument for a Tournament of Roses Parade Float in 2013. It was named “Canines with Courage” and it received the President’s Award. The National Monument sculptures were then taken on a road tour before being installed at Lackland Air Force Base in Texas. The unveiling and dedication of the National Monument was a historic event and received national media coverage. Slater was one of the featured keynote speakers and felt tremendously honored to be a part of such an important project. She says, it has also been so rewarding to learn that the Monument continues to be used as a ceremonial backdrop for each class of graduating dog handlers at Lackland, and as a contemplative space and healing touchstone for dog handler who visit there from around the world.

Slater reflects that this was a project that checked all the boxes of what inspires her most, “It is filled with history and bravery and heroism. This National Monument was a story that needed to be told in bronze and granite. It is a story of man and animal working together for the good, dedicated to saving lives.”  Slater says she believes, “Good art, has the ability to tell stories that inspire our souls and open our minds to something larger than ourselves. Great art, has the ability to heal the wounded heart…”