"Paula, Wow that’s incredible. Thank You so much. I can’t believe it, truly. You did a beautiful job."

"Paula, it is fantastic! It is beautiful! We like that you chose to sculpt St. George slaying the Dragon in an old world traditional style."

"It looks just beautiful. Hopefully funding will open up soon for our sculpture in Italy. Thank you so much for the beautiful maquette. Please let me know when Piero lets you know that funding opens up again so we can begin our large model too."
Thank you and Sending you love,
Sonia

"I am sure that Sonia would be delighted. The statue is absolutely exquisite! It would be amazing to have your statue in the courtyard of the church." 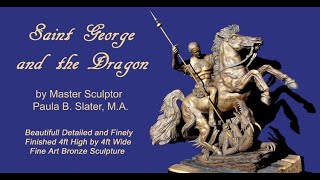 Saint George and the Dragon Bronze Sculpture (Creation through Completion)

St. George and the Dragon Bronze Sculpture by Paula Slater is a 4 foot high bronze. The highly detailed sculpture of St. George is modeled after George Brand who passed away in 2016. Brand was an award winning body builder, actor and philanthropist. He was a physically beautiful man and his family and friends describe him as having a wonderful sense of humor and a heart of gold.

HISTORY OF SAINT GEORGE:  “George the Great Martyr is thought to have lived in the late third century in an area which is now in Turkey. He was born into a noble Christian family  at a  time when it was a crime to be a Christian. In fact, for three centuries after the birth of the Church, Christians were  intermittently  persecuted by leaders of the Roman Empire.  Besides having their churches and scriptures burned, Christians were often tortured, imprisoned, beheaded, killed by gladiators or thrown to the lions.

As a young man, George became a soldier in the army of the Emperor Diocletian. In the year 303, when the emperor ordered  the systematic persecution of Christians, George refused to take part. He presented himself before the Emperor and publicly denounced this action. For this he suffered numerous tortures and was eventually executed , his remains being taken to Lydda in Palestine, the birthplace of his mother. It is believed that because of the  steadfast Christian witness and martyrdom of St. George, many soldiers were converted to Christ, and other people as well, among them  Queen Alexandria, the wife of Diocletian, and a pagan priest, both of whom also suffered martyrdom for their decision.

George became highly revered in the Christian world and many legends arose giving fantastic accounts of his life. The most famous is the legend of St. George slaying a dangerous dragon in order to rescue a beautiful maiden. Thus the icon of St. George commonly displays the saint on a horse, in battle with a big dragon. The dragon is symbolic of the Evil One who attacks  God’s Holy Truth, or the Church, which is often signified in icons as a beautiful maiden. The Saint’s lance is surmounted by a cross, symbolic of Jesus Christ, who Himself was triumphant over sin and evil, and through whom every Christian finds strength. Because he was victorious in his struggle, St. George is considered the defender and protector of  the Church of Christ. St. George is popularly venerated and has been adopted as the patron saint of  many nations of the world.”