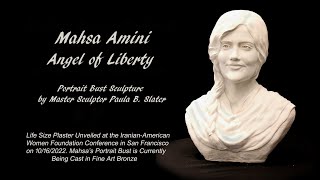 Mahsa Amini Portrait Clay (for Bronze) Bust has been sculpted by Paula Slater. She has named this life size portrait sculpture the ‘Angel of Liberty’.

Slater will unveil a plaster casting of the bust at a sold out event sponsored by the American Iranian Women’s Foundation being held in San Francisco this Sunday (October 16th, 2022). It will take a few more months until a bronze can be completed from the mold

Today in 2022, Mahsa Amini, like Neda Agha-Soltan in 2009, has become the face of massive on-going protests for freedom in Iran. The death of 22-year-old Mahsa on September 16th while in custody of the Iranian “morality police” for wearing her hijab/scarf too loosely, has stirred millions of Iranian protestors and World-wide condemnation of the terrorist Islamic Regime. Eyewitness accounts of women detained with Mahsa said she was severely beaten, and leaked medical scans by independent observers attest to her suffering skull fractures leading to coma and death.

The courageous women and girls in Iran have been leading the protests, burning their hijabs and cutting their hair in defiance of their cruel fascist government. These recent protests have spread to Universities, high schools and even younger girls who want freedom from their restrictive and tortuous government. This is the largest demonstration of protests in Iran since 2009 when millions of countrywide protestors were close to toppling their fascist Regime.

Among the recent murdered are two 16 year old female students, Nika Shakarami and Sarina Esmaeilzadeh, who joined in the protests that developed after the death of Mahsa Amini. And just as the families of the protestors in 2009 were forbidden to have funerals, so too, have the families of these recently murdered daughters been threatened with torture and imprisonment if they were to hold a memorial service.

So again, Slater she says she felt called to sculpt Mahas portrait and has named it the ‘Angel of Liberty!’

Paula explained, “When I moved to Northern California a few decades ago, I went to work for the sweetest Iranian family. They told me how they had to flee Iran/Persia for their lives in 1979 when the Islamic Regime took control of their country. I learned many things about their plight and followed the murders and heinous crimes committed by that terrorist Regime which continue to this day. I’ve wanted to show my support for the Iranian people’s fight for freedom and Democracy. I pray one day I can donate all of these historic bronze busts to the Tehran Museum in a free Iran.”

Slater’s important sculptural works are viewed by millions of people each year. She has been an internationally recognized professional sculptor for the past thirty years and has sculpted more than four dozen life size and monumental bronze commissioned portraits of U.S. Presidents, Congressmen, celebrities, leaders of industry, military heroes, historical portraits and people from all walks of life—probably more bronze portraits than any living sculptor today. Two of her bronze monuments have been designated State Landmarks and she sculpted the many monumental bronze sculptures that make up a huge U.S. National Monument.

One of Paula’s most recent portraits is a 1.5 times life size bronze bust of past United Nations Secretary-General U-Thant commissioned by the Florida International University in Miami