“I want to thank Paula Slater, our Sculptor, for the remarkable work she has done in crafting this monument. We have a stunning world class monument because of her. Paula, you are not only the sculptor of this magnificent monument, but you now a great friend and family member of the Hmong family. Your kindness and skillful abilities in building this monument will forever remain in the heart of the Hmong people.” 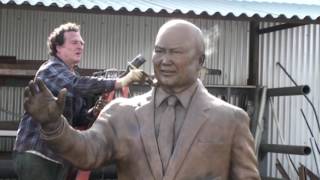 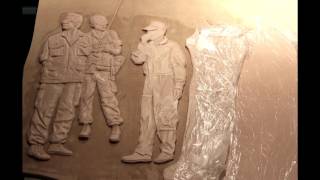 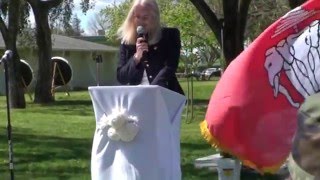 The goal of this project was to create a world class public Monument to General Vang Pao (GVP) who was Military Commander for United States CIA covert operations in Laos during the Vietnam War. GVP lead the Hmong to rescue downed American pilots, provide intelligence and disrupt the flow of weapons and supplies into Vietnam.  Former Director of the CIA, William Colby, acknowledged General Vang Pao as “the biggest hero of the Vietnam War.” After the War and once resettled in America, the General dedicated the rest of his long life to work on behalf of the Hmong.

Slater’s clients proposed an over life size full-figure bronze portrait of a youthful GVP in military uniform, but were open to her design suggestions and whatever other components she felt were needed. In his life’s work, General Pao became known as the “Father of the Hmong people”, and since there were already a few other portraits of the young GVP in uniform, Slater instead drew sketches of a 10’ high portrait of GVP, the civil servant and statesman, in his later years. She also included the installation of three very large 52” high by 44” wide informational bronze relief panels on the two tiered 6’ high granite base depicting his early years and crucial role with Hmong fighters working in conjunction with the CIA to save thousands of American lives; to his middle and later years promoting education and creating organizations to help his people adjust to living in the United States, as well as, his meeting with President Nixon and President Ford to secure benefits for Hmong veterans.

Slater wanted to include a fourth relief panel on the back of the pedestal which would give information about the heroic Hmong people and their continuing persecution in Laos for having aided the U.S. during the Vietnam War. However her client suggested they instead include a large etched granite wall to tell this important and heart wrenching story–similar to the etched granite wall in a National Monument Slater had sculpted. This was a wonderful addition to the Monument and Slater named it “The Cost of Freedom”. She designed a 30ft by 20ft oval shaped concrete slab for the installation of the Monument in a lovely grassy and tree filled location in Stockton, California.

“It was a wonderful experience working with my client, Dr. Cheuyengther Xiong, and the GVP Monument Committee,” says Slater. “They were very open minded to my suggestions and trusting of the process. I kept them informed each step of the way and they visited my sculpture studio and the bronze foundry several times during our journey together.” Paula and her husband, Chris Slater, have worked with a great team of subcontractors on several of her past Monument projects and were able to coordinate all aspects of this project with them. This included the 17,000 pound solid granite base, the huge etched granite wall, casting of the monumental bronze portrait and three large relief panels, as well as, coordinating the site contractor for creation of the footings and concrete slab, and working with the subcontractors for installation of all the different components.

Slater always does a tremendous amount of research before beginning work on a monument project, and after she had read about GVP she says she had a very vivid and powerful dream in which the General held out his right hand and said to his people, ‘Come with me to a free land.’  Slater says, “I awoke with tears in my eyes and phoned my client, Dr. Xiong, to share my dream and that this monument’s design needed to encompass the whole of GVP’s life, not just his military career but to also tell the story in words and sculpted images of his long and dedicated life. Dr. Xiong understood immediately and supported my vision. It is our prayer that this historic Monument not only be a place of information about GVP and the tremendous bravery and sacrifice of the Hmong people, but also to help heal the loss and wounds of the past and inspire the viewer’s mind forward into the opportunities of this ‘free land’.”