Dear Paula, There are hardly the right words to convey to you our thoughts of thanks and gratitude for your fine work on the bust of our brother/uncle William Charette. Please know that we feel so honored and that his medal of honor legacy will live on through your wonderful work. In gratitude,

Paula, Our dream to create a Veterans Mall in Ludington along the shore of Lake Michigan began with you. Our family searched for months to find a most worthy tribute to all veterans. A Google search produced an image of the "Ascent of Heroism" and sent goose bumps up my spine.

A year later our dream has become a reality with not one Paula Slater sculpture but two. Seeing your Ascent of Heroism in person will move one's very soul, there is so much to see and every veteran and family member who looks at it will deeply connect. The centerpiece of the Mall is your larger than life bust of William Charette who's very likeness has been so expertly captured. But upon looking into his eyes, his very spirit is in there too. He will now forever gaze towards the waters of Lake Michigan.

Paula you are not only a Modern Master, you are humble, unselfish, and extremely caring. Your time spent being interviewed by our newspaper and your evening at our Art Center was so appreciated, but the gift of your talent made our Veterans Mall so much more than our committee ever dreamed. You and Chris are always welcome, and we will leave the light on for you at the cabin. Forever Grateful,

"Hi Paula, WOW!!!!!!!!!!!!!!!!!!!! What an incredible gift you have, pretty emotional right now. These photos of the William Charette clay bust took my breath away, so am going to take a break and bask in it. Truly in awe. 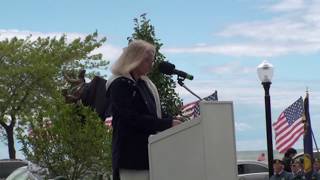 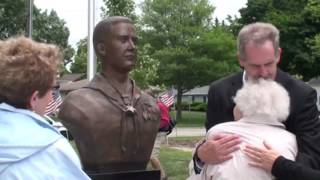 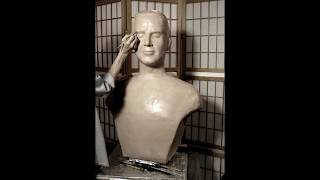 Slater was honored to sculpt the bronze portrait bust of William Charette. Charette served in the U.S. Navy for 26 years as a hospital Corpsman during the Korean War. He was awarded the Congressional Medal of Honor from President Dwight D. Eisenhower in 1954 for his tremendous heroism above and beyond the call of duty. He was also awarded the great honor of making the final selection of the World War II Unknown Soldier, now buried in Arlington National Cemetery.

During an intense battle when his platoon was overrun by North Korean soldiers, an enemy grenade landed near Charette and a badly wounded Marine he was aiding. He placed himself on top of the Marine in order to shield him from the explosion, and in so doing, the grenade’s blast tore off Charette’s helmet, destroyed his medical bag and knocked him unconscious. When he awoke, he found his face bleeding from shrapnel wounds and he couldn’t see. He recovered enough to continue to aid Marines in the battle using torn parts of his uniform to dress wounds. In another instance, he removed his battle vest and placed it on another wounded Marine whose vest was destroyed from another explosion. In yet another instance, he attended to five Marines who were wounded in a trench from another explosion, and then stood up in the trench exposing himself to incoming rounds in order to carry the most serious wounded comrade to safety.